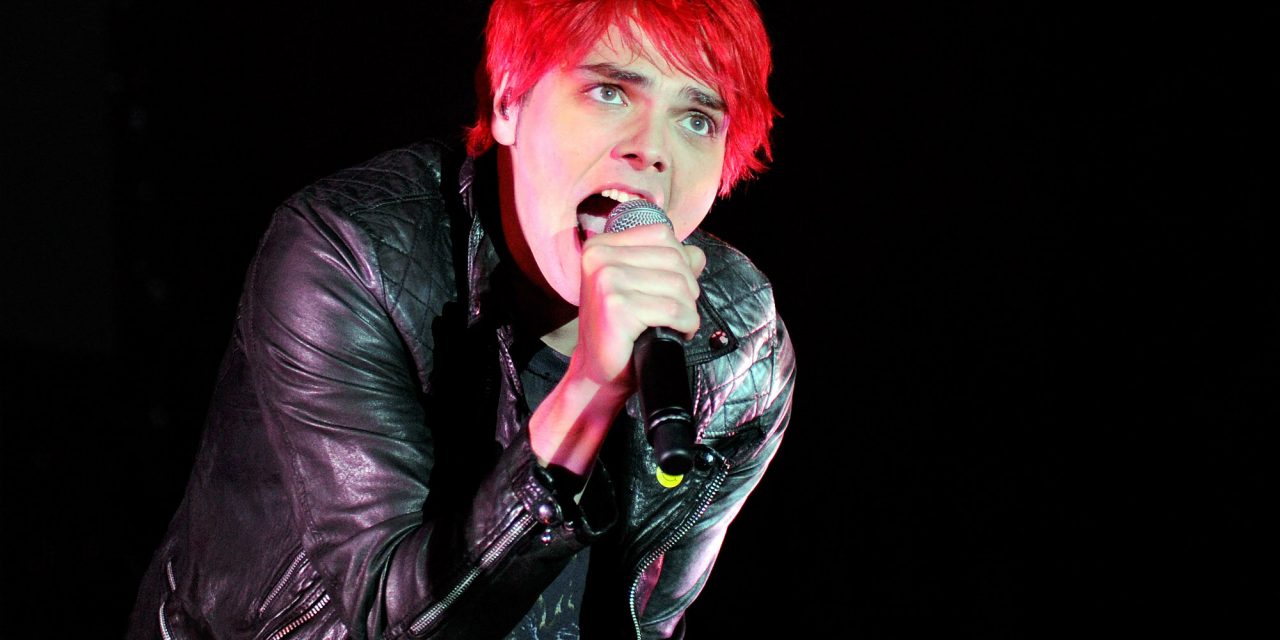 My Chemical Romance have revealed a series of symbols on their new merch that has fans thinking there’s a new album on the way.

The band kicked off their much anticipated reunion tour last night (December 20) at Shrine Expo Hall in Los Angeles.

Their first gig since 2012, the band announced the comeback show back in October and when tickets went on sale on November 1 they sold out in minutes.

Aside from sharing clips from the performance, fans have also been busy snapping photos of MCR’s new merch. You can buy the new merch here.

Included amongst the merch were sets of pins featuring a series of symbols that were used to announce their return back in October. The symbols – Clarity, Courage, Sacrifice, Devotion – have fans speculating what they could mean.

A better look at the new symbols on the merch trailer! pic.twitter.com/Y0XEIgh98w

According to Reddit user MrGingyBread, the symbols are taken from tarot cards. Read their explanations for each symbol below:

“The Ace of Swords reversed indicates that a new idea or breakthrough is emerging from within you, but you are not willing to share it with others just yet. You may still be exploring what this idea means for you and how to best express and manifest it in the external world. You may also seek greater clarity about whether this is an idea you wish to pursue more fully, perhaps because you are unsure if it will bring the results you truly desire. When this card appears in a Tarot reading, it’s important to give yourself time and space to meditate and clear your mind so you can ‘birth’ this idea in the most effective way.“

“The Moon reversed indicates that you have been dealing with illusion, fears and anxiety, and now the negative influences of these energies are subsiding. You are working through your fears and anxieties, understanding the impact they have on your life and how you can free yourself from such limiting beliefs. This is a truly liberating and transformational experience.

“You may try to bury these feelings even deeper within your subconscious so you can avoid your dark shadows. You may not be ready to face your emotions, pushing them to the side and pretending as if nothing is wrong.“

“When the Tower card appears in a Tarot reading, expect the unexpected – massive change, upheaval, destruction and chaos. It may be a divorce, death of a loved one, financial failure, health problems, natural disaster, job loss or any event that shakes you to your core, affecting you spiritually, mentally and physically. There’s no escaping it. Change is here to tear things up, create chaos and destroy everything in its path (but trust me, it’s for your Highest Good).

“Just when you think you’re safe and comfortable, a Tower moment hits and throws you for a loop. A lightning bolt of clarity and insight cuts through the lies and illusions you have been telling yourself, and now the truth comes to light.“

“Wands symbolize creativity, and the Ace of Wands is the boldest among the cards in the suit. It is not the kind of creativity that you learn from school or as a hobby. It is bravely finding your own voice, it creates a place where you can develop your own vision. In other words, it is associated with willpower, and creativity in the cosmic sense.

When you draw the Ace of Wands, it is an indicator that you should just go for it. Take the chance and pursue an idea that you have in mind. Take the first steps to start the creative project. The Ace of Wands calls out to you to follow your instincts. If you think that the project that you’ve been dreaming of is a good idea, and then just go ahead and do it.”

Other theories revolve around a jacket and its patches. MCR fan @mythweaver_ took to Instagram to share the new jacket that their mother had purchased, theorising that each patch is referring to an album including an unconfirmed possibility of a fifth one.

MADE IT TO THE MCR REUNION!!! We decided to check out the venue at 4pm Thursday and the line was going strong so we hoped in for the overnight!!! Thank you to all the wonderful band members, staff, and amazing fans for being such chill people!!! We are past security now and just waiting for doors at 7!!!!!! ALSO DID I MENTION THE BAND CAME OUT TO PERSONALLY GIVE US THESE BLANKETS ON THURSDAY NIGHT?!? And good thing too because apparently LA is cold AF at night!!!

The first patch is a gun shooting out a flower, referencing ‘I Brought You My Bullets, You Brought Me Your Love’. The patch next to that one is Pepe from ‘The Black Parade’.

The ‘Danger Days’ logo is on the other sleeve next to a coffin-inspired image. Suggesting the patches are in chronological order, the user states this must mean it’s for a new album.

Some went on to allege that the coffin patch is actually for ‘Three Cheers For Sweet Revenge’ given the coffin imagery could reference the ‘Helena’ music video. However, @mythweaver_ uploaded a second video showing that the same logo is present on the new merch trailer. It is the only album-inspired logo present from what can be seen.

The band released four albums together before they split in 2013. Anticipation grew around a reunion with the recent 15th and 13th anniversary of ‘Three Cheers For Sweet Revenge‘ and ‘The Black Parade‘, respectively. As well as the hope for more world tour dates and perhaps 2020 festival shows, fans are left wondering whether the band will release new material – with the follow up to to 2010’s acclaimed ‘Danger Days…’

Last night’s gig comes as MCR revealed earlier this week that they began planning their comeback in 2017, saying that that’s when they first got back in the room together to discuss reforming.

My Chemical Romance have five more confirmed concerts, all in March 2020. They play two shows each in Australia and Japan, with a New Zealand gig in between.

There are no confirmed UK dates as yet, with All Points East and Reading And Leeds the favourites to secure the band for a festival show.