Kate Bishop: Everything You Need to Know About the Young Hawkeye

If you’ve seen the recent Avengers: Endgame trailer, then you may or may not have noticed a certain little hint towards the appearance of Kate Bishop. The trailer showed Hawkeye helping a young girl with her archery. It is our dearest hope that this is none other than Kate Bishop. Even if she doesn’t live up to her full potential in a later movie.

RELATED: What The Avengers’ New Suits In Endgame Are For

Kate Bishop is a superhero in her own right, and she has a lot in common with Hawkeye. And we do mean a lot. But we’ll get to that in a moment. Here is a crash course on everything you need to know about the younger Hawkeye, in the off (but very much hoped for) chance that she truly does make an appearance in Endgame.

9 Yes, Her Superhero Name IS Hawkeye

Yes, Kate’s superhero name really IS Hawkeye. And yes, that can get confusing sometimes. Having two heroes of the same name can be confusing in any sense, but especially so when both are still actively using the name.

Clint Barton, the Hawkeye we all know and love, holds the Hawkeye mantle still. He’s one of two male characters to hold that title. Kate makes the third character, but the first female. He’s also Kate’s mentor, so it’s pretty clear that he’s okay with her using the Hawkeye name as well (much like Peter Parker and Miles Morales have worked things out).

Kate falls amongst the ranks of non-super powered heroes. Like Hawkeye and Black Widow, she doesn’t need special powers to give her an edge. She’s an extremely competent fighter as it stands.

Kate specializes in archery, hence the moniker she picks up. But she’s also skilled at other fighting styles, and has proven time and time again that she can take a punch. Now if only she could get a little better at dodging them…Being an archer, Kate has an eagle eye. It allows her to make amazing shots, but it also lends well to her detective skills. So much so that she decides to go into business for herself, a sort of blend of superhero and private eye. 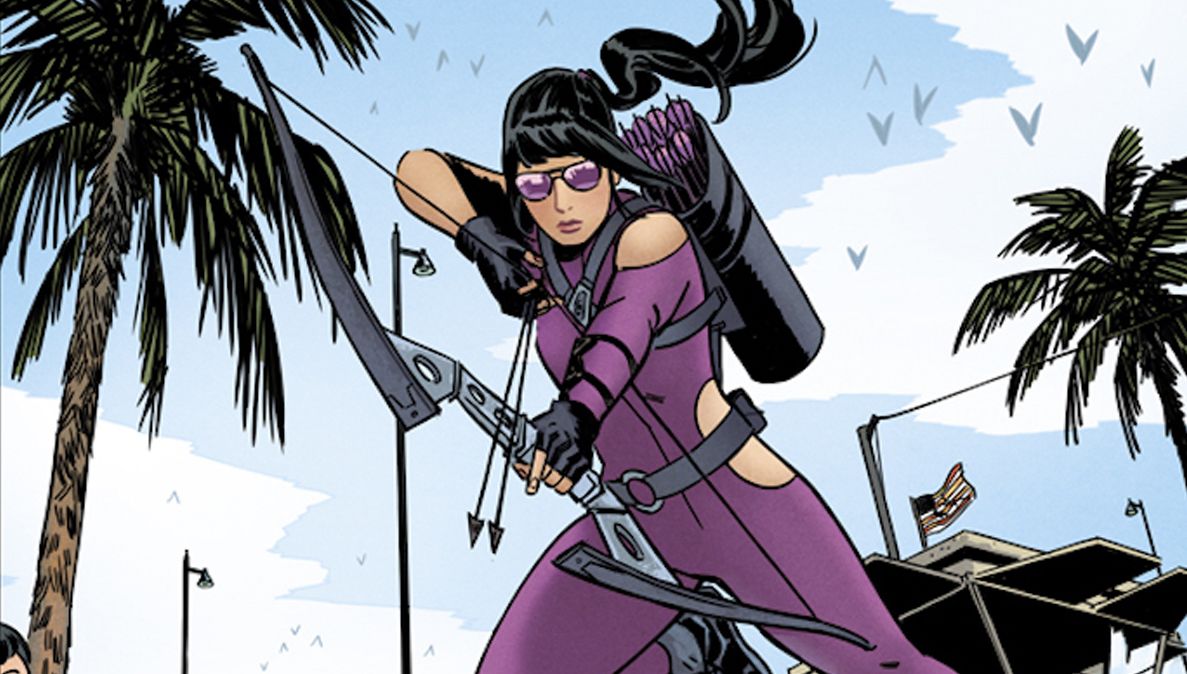 Her costume has the distinctive purple we all remember so well from the original Hawkeye costume. It’s pretty distinct to say the least. At least she can rock the colors pretty well. A lot of the flair to her suit was admittedly influenced more by Mockingbird’s style than Clint Barton – which is probably a good thing for everyone.

Naturally, Kate carries with her a bow and a quiver full of arrows. Like the older Hawkeye, she has a bunch of trick arrows. Arrows that explore, taze, gas, expel glue, shoot nets, you name it. Some of them come from her mentor (who was likely supplied them from Tony Stark), others from T’Challa.

Kate Bishop goes by a lot of names other than just Hawkeye. Some of the names are intentional, or at least tolerable in her minds. Others have formed because of the confusion between her and Clint’s Hawkeye. It would seem that the civilians in her world get just as confused as us fans, from time to time.

Some of the intentional names include Hawkette, Lady Hawkeye, and Lady Hawkguy. All of them will reference back to the Hawk name in some way shape or form. Likewise, her business (the private eye/superhero combo) is named Hawk [dawn eye].Kate has also been called the ‘Other’ Hawkeye, the ‘young’ Hawkeye, and the ‘inferior’ Hawkeye (that one has been exclusively used by classic Hawkeye villains). We’d advise against calling her the latter to her face, as it will result in some bruising. 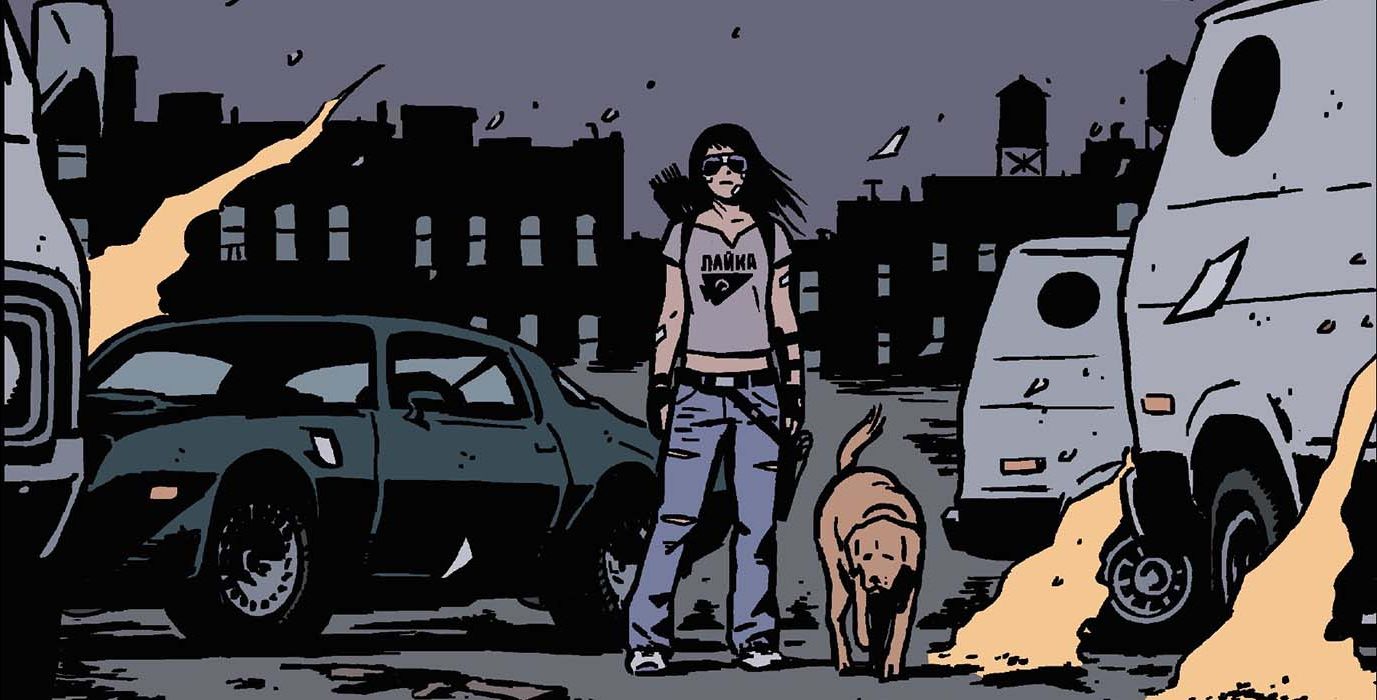 Kate Bishop made her first appearance in Young Avengers back in 2005. Kate joined the team, despite not having any powers. She quickly helped the team establish themselves – as the ‘adult superheroes’ Ironman and Captain America wouldn’t help or train them without parental consent (we can certainly understand the logic here). Kate helped them find a home base, and even went so far as to help supply the team with their gear.

Though the gear wasn’t the reason the team accepted her so well. Kate is naturally suited to fit in well with really any group she’s thrown into. She’s analytic and capable of understanding complex situations – so she’s the perfect fit for any hero team trying to get off the ground (and survive). 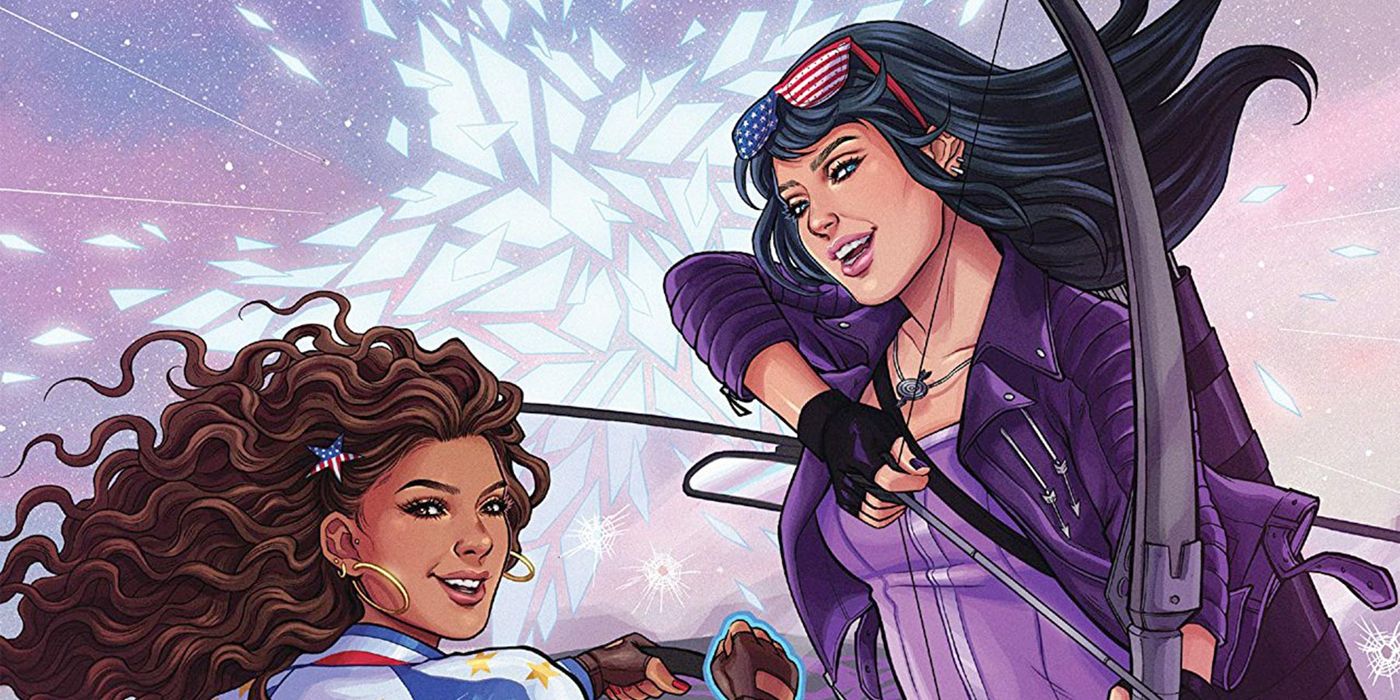 Kate’s best friend is America Chavez. Though most simply know her as America. And yes, that really is her name. She’s a superhero as well, one with the ability to punch open star-shaped portals on a whim. Talk about a useful ability! She’s also extremely strong, confident in who she is and what she is capable of.

RELATED: That Better Not Be Kate Bishop In The Avengers: Endgame Trailer

America always has Kate’s back, even going to far as the join a team she would otherwise have no interest in joining. Together they can handle almost any situation. America’s calm but determined demeanor is the perfect balance to Kate’s personality.

3 She Has Some Daddy Issues 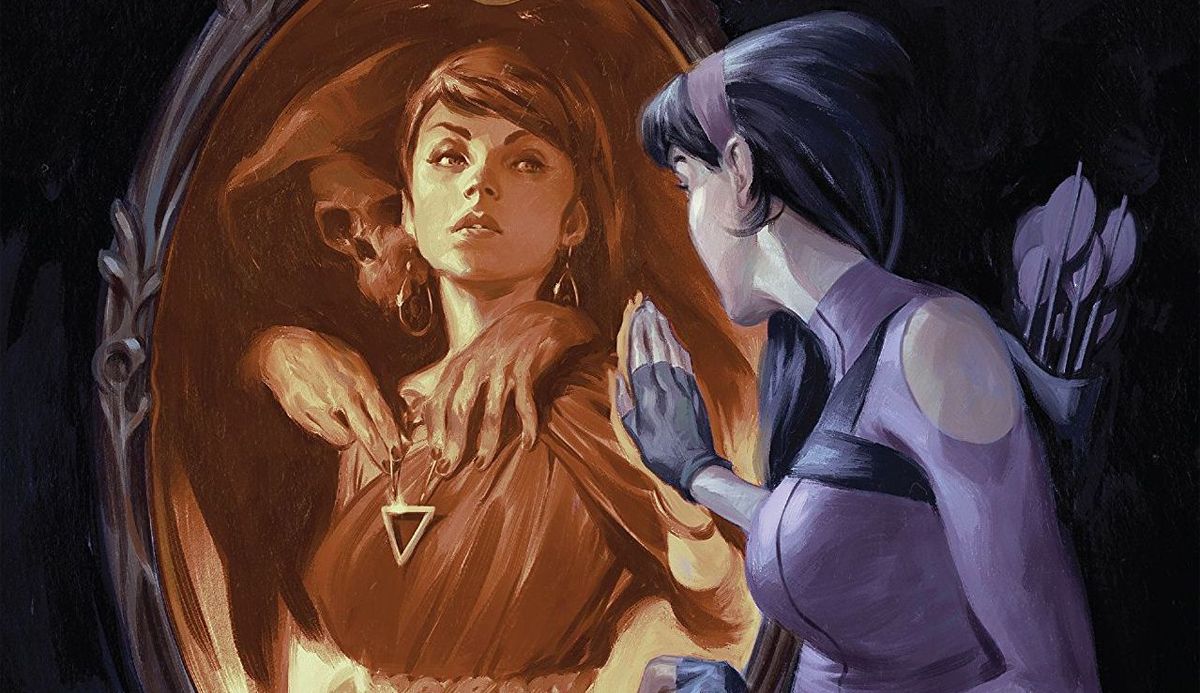 More accurately, she has some parent issues. Her parents have been absent at best, and well…at their worst…let’s just say they’re not exactly on the same side as Kate.

Kate’s dad is a crime boss, to put it lightly, and a villain at worst. It really depends on how generous you’re feeling, and what distinction there is between the two of them. Kate’s relationship with him is understandably very complicated because of this.Kate’s mom was missing and presumed dead for the longest time, but as always with superheroes, nothing is ever that simple. Her mother is a grayscale sort of character, with the truth about her still waiting to be fully revealed. 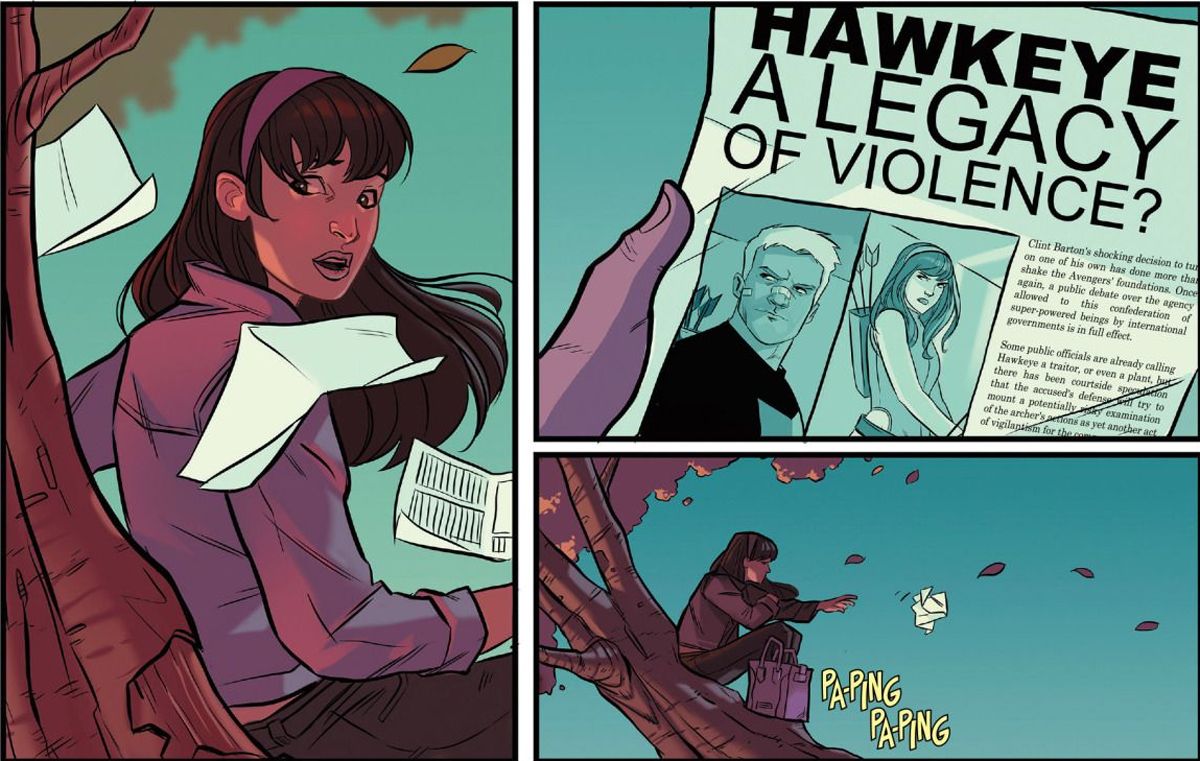 Kate Bishop has been dragged into more than her fair share of major events, as far as the comics are concerned. Kate has participated in major comic events like Civil War, Secret Invasion, and Civil War II, just to name a few.

It was at the end of Civil War II that Kate realized she needed a change of scenery. She wasn’t exactly thrilled with the actions Clint Barton had taken, not that she fully blamed him for them either. She really wasn’t happy with the press and civilians assuming their shared name meant she supported what was done. 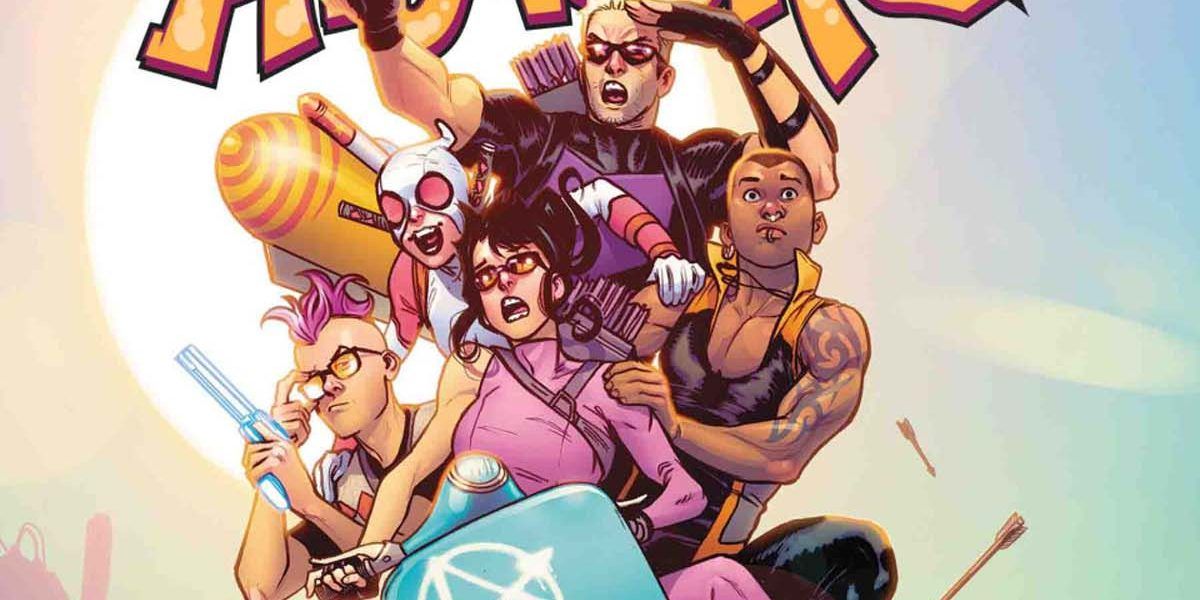 Kate Bishop is probably best known for her affiliation with the Young Avengers. It’s where the first got started, and honestly, she’s done a lot of good in her time with that team. However, all good things must come to an end. In the case of Kate, she needed a change. So she moved out to the West Coast – a location painfully shy on superhero teams, for one reason or another.

It’s here that Kate formed her own superhero team. It’s called the West Coast Avengers. And if you haven’t been reading the series, you’re missing out on a lot of laughs. Her team consists of herself, America, Hawkeye (Clint Barton – though he insists he won’t stay around forever), Gwenpool, Kid Omega, and Fuse. Together they’re doing what they can on their very limited funding to protect the West Coast from supervillains. 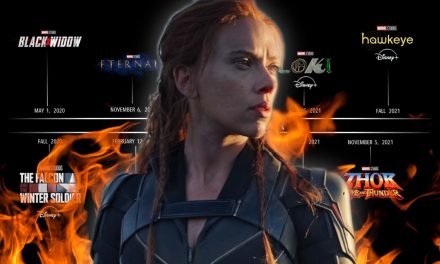 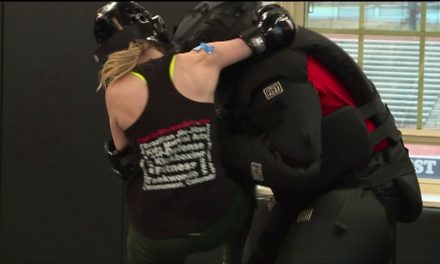 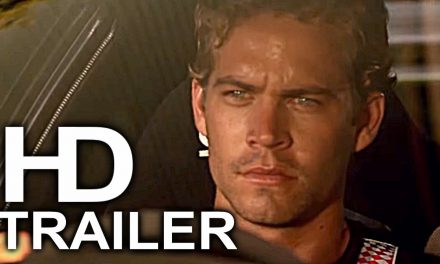